Jaded About Social Media For Change? - Let's Talk About It! 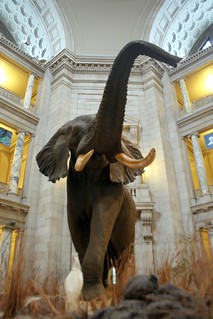 There seems to be an elephant in the social media for change room - and it's one I think it would be good to acknowledge, discuss, and ultimately deal with.

In the last few while, I've been getting Twitter DMs from top players in the nonprofit tech and social media for change space -- sharing how they're unmotivated or jaded with using the web and social media for change. As if the phrase has lost its meaning somehow. Or a bubble had been burst. I know I've been feeling the same way. Perhaps you've been feeling it too -- or come across others with a similar vibe?

So I thought it would be good to catapult this elephant into the open -- to get it out of the Twitter DMs and other virtual closets - so we can deal with it and take the conversation (and our work) to a higher level. I asked my followers on Twitter to share their thoughts so as to get the conversation started:

Writing a post about being jaded about social media 4 change. Are you (jaded)? What's it feel like? How'd we get here?


tomjd: I'm not, but I imagine some ppl might be bc they expected too much, too quickly, too easily. Theres no magic here, just more work

peopleandplace: touched on this topic in a comment (third one down) to a post by @amyrsward. http://bit.ly/4sXMxl

Jerimee: you should read this imho - Ralph Nader: "the Internet doesn't do a very good job of motivating action." http://is.gd/zeIG

timbrauhn: I encounter people who assume that SocMed will automatically change all lives. Aim towards the middle, not too high, not too low.

I also asked a few colleagues to share their thoughts in more detail:

"I've been working on the Internet/online for really long time - since 1989. I was working on BBS, The Well, and the Unix/Text Internet. Then around 1992-93 - the web appeared. In the early days, there was tons of excitement and I was on the edge in the area of working with nonprofits. We launched experiments, explored, and pushed it to the edges. Learned lots. I remember the first Aids Day that we celebrated on the web - like 1994 or 1995 - we turned our front page from white background to black background - it was just when the background colors were added to the html language. I also remember attending a web consortium conference in Cambridge, MA - when Java was just launched - and had dinner with the other web librarians - those of us who staked out folders on Berner-Lee server. I was the Dance Library until it got so big I couldn't manage it.

Around 1997, I got jaded because the web got really commercial ... and lots that early days wild west feeling. All of a sudden the big guys stepped in."

"I become unmotivated when I see the tools take center stage, over and over again. i.e.'10 tips for Twitter usage' or 'Facebook do's and dont's.'

The stories of real people, real impact, and the real tangible work achieved by nonprofits are seemingly, in many instances, becoming secondary. The spotlight is being turned onto the medium by which we deliver our message, when it's the message that should be the immediate and most important focus. We operate the tools, we are not the tools.

The mechanisms behind a campaign are important on many levels - but that only constitutes part of the story, and this is where - I find - many organizations get stuck in. I care to see the final product. Yet it's almost easier to have organizations discuss the tools and how they utilized them, than have them explain the level of their impact."

I think we can use social media as part of our toolkit for achieving our missions.  However, it seems like more organizations are using social media to merely promote the idea of their missions. We need to be conscientious that our work with social media is always focused on helping us achieve our organization's missions.  Social media, for celebrity sake, is a waste of time and donor money."

"I'm definitely jaded. I think it has to do with the fact that I don't know if my work is actually making change. Over the last year I've been working on or promoting online tools that help people make a difference - tools thousands of people interact with everyday. Yet almost none of these projects track real world impact. So when I begin to question my work, and when my friends and family ask me what I mean when I say I make change -- I'm left stumped. I want to be able to know my projects are making an impact but as it is, I need to rely on a mixture of google analytics and faith. And somehow that doesn't feel like enough anymore.

Our impact should inspire our work, yet without a focus on measuring that impact, I'm finding it harder to connect to my muse."

I also asked my Twitter friends and colleagues for recommendations to get out of this mess. How do we deal with all this 'jaded-ness'? What should we do to get excited again: How can we fix this?

rootwork: Remind myself that social media is just a means; social change is the end. Can feel jaded abt media but still work #4change

starfocus: If I start to feel even a little jaded - it doesn't take much to get me inspired again. Social Change is about patience too!

iberyoung: making the opportunities more self service could help

"I think this runs in cycles - and you've just got to get over being jaded - and keep in trucking. When this happens to me - and it happens a lot - I go offline - i do something else .. I take a break. Inspiration always comes back .. something ignites my curiousity, interest, and passion - just be patient."

"I think it's worth taking a step back and examining life in the sector pre-social media. An astounding amount of good was accomplished pre-social media age, without the bells and whistles that we can draw on now. We need to approach the tools as complementary, and not as the end-all-be-all of social change. As for overexposure, one has to recognize their limit, and be able to identify the breaking point. If unplugging for a few days, weeks, months, is called for, follow that gut instinct. A jaded mind will only breed jaded output."

"I think organizations and individuals must have the courage to admit when things are bad; it keeps perspective for yourself and for people who are involved with your activities, it also makes them more thrilled when times are good.

One example: On my personal Twitter feed, I shared how tough things were for me professionally and personally when my father slipped into a coma and passed two months later.  Sometimes, work takes a back seat to life and I was honest about that---it made people a lot more accepting about KAP launching technology late. It also gave me the freedom to come back to work recharged after a week-long vacation. Folks were happy for me that I was doing what I needed to heal and to be a better nonprofit executive director.

I realized that I don't have to be some social media princess for people to respect me or like what I do; I just have to do a good job and keep it real."

"YES to SO much above! I think taking breaks, getting offline and focusing on offline actions, and setting realistic expectations are all key.

I also think tracking and stressing impact measurement could help a lot. Once we know we're making a difference in the world, inspiration is bound to come back.

There are a lot of awesome conversations happening around impact measurement -- like this post by Paul Brest, this post (and comments) on Beth Kanter's blog, and these roundup explorations by Lucy Bernholz & Nathaniel Whittemore. How can we draw on these conversations to help us measure more impact within our social media for change campaigns?

Romina opened my eyes: I think it's very easy (and seductive) to discuss social media for change based on the tools (Facebook, Flickr, Twitter, etc). What would happen if we first discussed the challenges of creating a bigger impact and then discussed the tools within that framework? How can we flip the conversation from "how can we use social media for change" to "how can the social change sector use social media to create a bigger impact?" Forget Twitter (Re: Ivan Boothe), let's talk about connecting to supporters. Let's talk about the impact of supporters who are part of our mission. What tools can help with THAT!?

The social media possibilities can be overwhelmingly inspiring (a coin's flip away from being jaded). But if we get back to basics and think about the change we want to see in the world (and start there!) - I think we'll be OK. As long as we can see the change we've made and are making, we might just wake up re-energized and want to do it all over again."

Thank you everyone for sharing your thoughts for this initial post! Now that the elephant's out there - (shwooh!) I'm very excited for where this conversation might go next . . .

My hunch is the best way we can solve our 'jaded-ness' is by identifying it and really digging into the underlying issues -- so Let's talk about it!