NetSquared's Ambassadors are responsible for almost all of the network's growth over the last year. These deeply engaged volunteers ensure NetSquared can continue to build the global #Tech4Good community.

NetSquared's goal is to create local nonprofit tech communities of practice in every city in the world. Sounds impossible? Maybe! But we think we can do it because our model of self-directed leadership means that we can scale easily with minimal staff investment. Just one TechSoup staffer has supported NetSquared as it has grown to 70+ groups reaching 13,000 nonprofit techies each year.

However, our model doesn't mean groups magically sustain themselves with no support. NetSquared local chapters are healthier when they receive a steady dose of event ideas, peer mentorship, and cheerleading. But our growth has spread the NetSquared Community Manager's time very thin, plus our ability to support people in their own language, time zone, and offer local connections has been a challenge as the network has expanded to 24 countries.

That's why we created the NetSquared Ambassadors, who are veteran organizers who have stepped up to provide regular mentorship and support for new and established groups in their region.

What Do NetSquared Ambassadors Do?

These amazing organizers are supporting their peers by volunteering to:

Ambassadors are how we provide NetSquared organizers the hands-on, face-to-face support that is the essence of NetSquared. Since we can't bring all our organizers together every year (too expensive!) we instead hold Ambassador-led regional gatherings and one-to-one meetings to share best practices and mentorship. This investment is paying off in a big way.

Referrals
We've been tracking the number of new organizers and new/reactivated groups over 2016 to get a sense of the value NetSquared Ambassadors bring to the network. What we discovered was surprising. 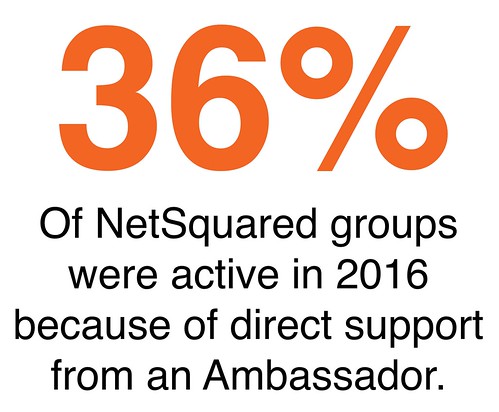 27 NetSquared groups received direct support from an Ambassador, resulting in a new or restarted group. With 74 active groups in the last year that means 36% of active groups can be attributed to the support of their local Ambassador.

The NetSquared Ambassadors are driving NetSquared's growth, and that's before we mention their contributions as trainers, webinar leaders, and mentors at events like our Africa and Europe gatherings or the annual NTC conference. You can read more about how NetSquared is building the tech for good community in the most recent annual report.

What have we learned from the NetSquared Ambassador program and how we can improve it next year?

What We Can Improve

If the Ambassador program is already so successful that it's driving a third of NetSquared growth, just think what we can do when we iron out the kinks!

I talk about my approach to the NetSquared Ambassador role in this interview with the Mobilisation Lab as part of their Beyond the First Click report on how volunteers can build power for movements and NGOs.

>
TechSoup and NetSquared are deeply grateful to the Ambassadors for their contributions to the tech for good community.