How Are the NetSquared Organizers Doing?

Every year we survey the NetSquared organizers to take the temperature of the community and get a sense of how we can serve them better. We want to identify what is working and what could be improved. This year 58 NetSquared organizers completed the survey (vs. 33 last year). Last year’s baseline results will give the current results comparative context.

The survey indicates that the organizer community is generally engaged and healthy, but continues to struggle in some areas. I dig into the results in the graphs and comments below, but you can also review the full results in the organizer’s handbook.

Recommendations and Next Steps

The survey identified a few gaps:

I am suggesting the following changes based on the feedback:

Please Rate Your Current Experience as an Organizer 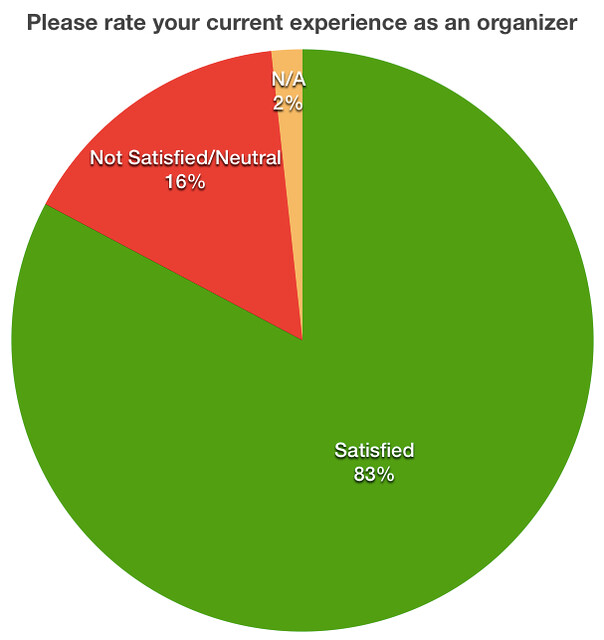 Things are looking up! Last year 75% of organizers reported being satisfied, so we’re trending upwards. :-) Now to get the other 17% deeply engaged…

Do You Expect to Be a NetSquared Organizer in Six Months? 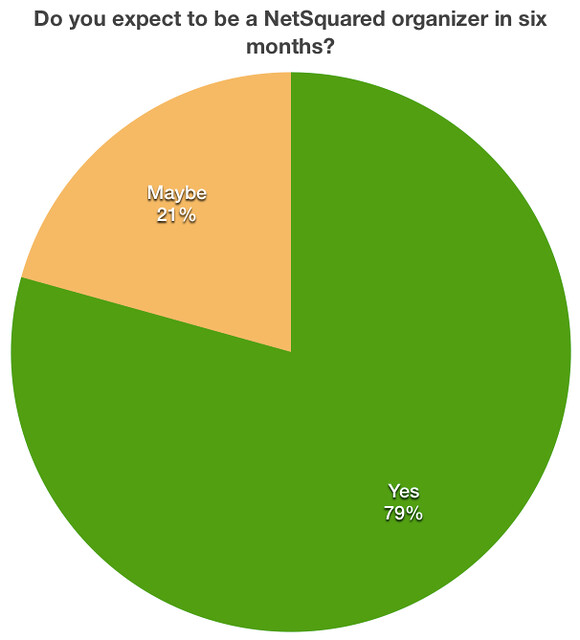 46 of 58 (79%) of respondents said “yes”. 21% said “maybe” and nobody responded “no”. The most common reason for answering “maybe” is that the organizer plans to move to another community, is experiencing burn-out, or is taking another career path.

The results on this question are virtually unchanged from last year, when 78% said they expect to continue as a NetSquared organizer.

How Many Hours Do You Spend Planning, Running, and Reporting on an Average Net2 Event? 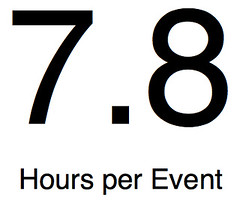 This was a new question added so that we could offer some estimates of the huge contributions of time donated by the NetSquared organizers.

The average organizer contributes 7.8 hours per event. During the previous year NetSquared groups held 468 events, allowing us to make a rough estimate of 3,650 hours contributed by our volunteer network. That’s pretty amazing!

We asked NetSquared leaders to rank the value they received from the following resources on a scale of 1 (not helpful) to 5 (very helpful). 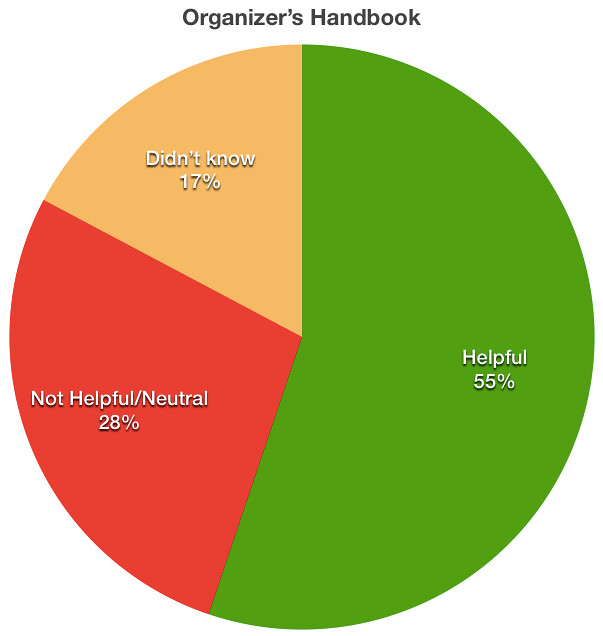 This is a core NetSquared resource but 17% of you don’t know about it! This is an increase from last year’s survey, when 12% were unfamiliar with this vital support. I’ve worked to raise the visibility of the handbook, but I haven’t made progress. However, the increase may be attributed to the fact that this year’s survey included more new and not-yet-active organizers. Just in case, here’s a link to the handbook once again. :-) 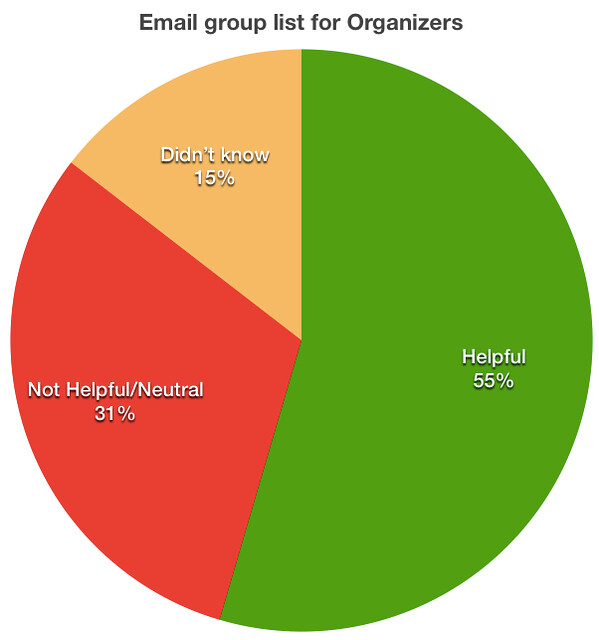 The mailing list is the best way to easily reach all NetSquared organizers and allow them to communicate amongst each other. Last year 73% of organizers found the list helpful, but this year just 55% think it is helpful and 15% of organizers don’t know it exists. I attribute this drop to the changes Google has made to how they filter email lists in Gmail and the introduction of the Facebook Group (more below). 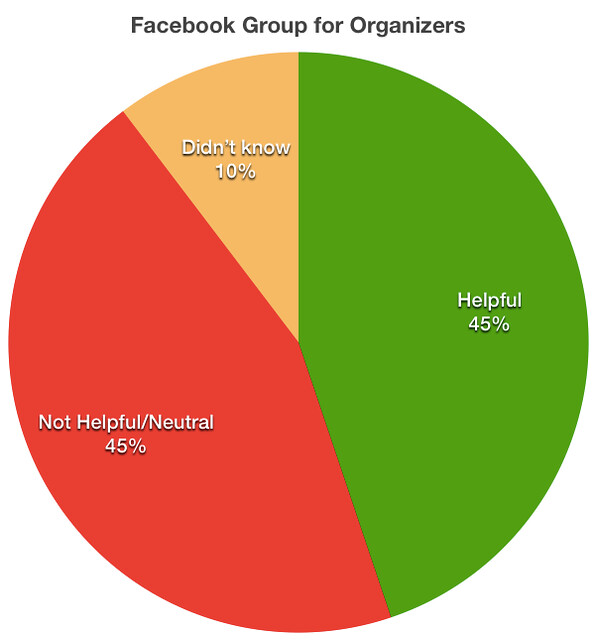 This group was created last year in response to organizer feedback that they couldn’t keep up with the mailing list. The plan was to split our communications into two channels: 1) a low-frequency announcement email list which includes all members and 2) a high-frequency opt-in Facebook Group for discussions.

I will continue to explore how to meet our diverse community’s needs while not drowning organizers with a flood of messages. 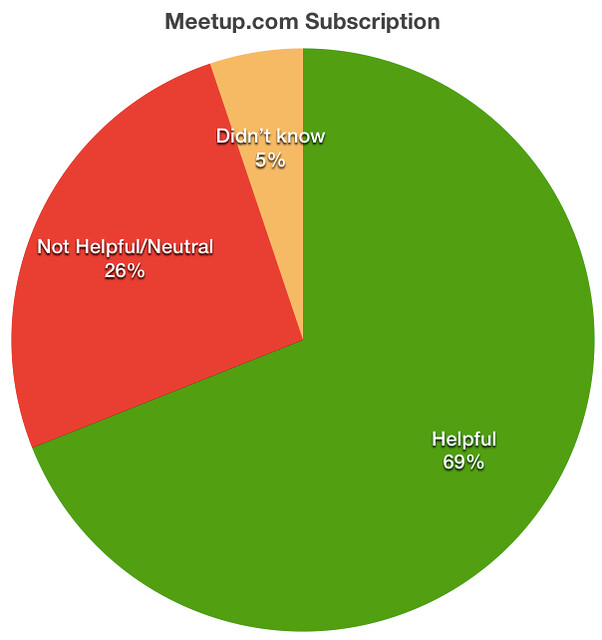 Groups that use Meetup find it very valuable. 69% of you ranked it helpful. This is virtually unchanged from last year’s 70% approval. Some groups don’t use meetup.com and instead choose to use sites like Facebook, Eventbrite or private RSVP platforms because of meetup’s restrictions like language support, community awareness of the platform, or meetup’s inability to export member data. 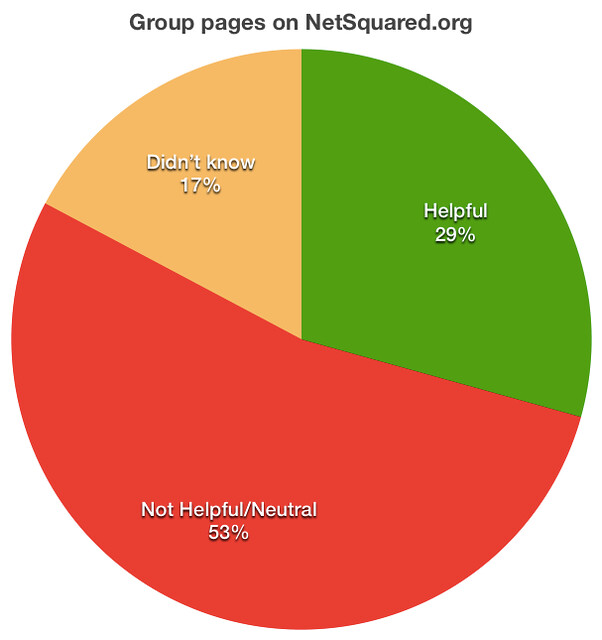 29% of you find the group aggregator pages on NetSquared.org useful. This is an increase from last year’s 21%, but still far lower than we would like. The NetSquared site is undergoing active development and we believe the new site will deliver much more value to group leaders. 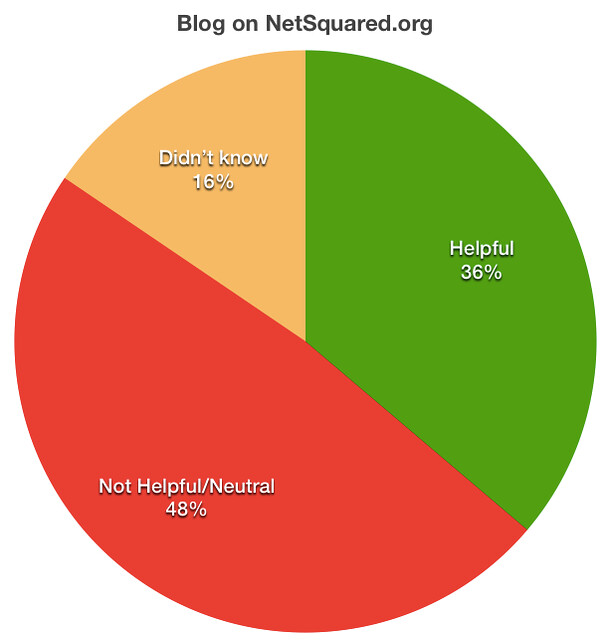 36% reported that the NetSquared blog, where we collect event reports and case studies as useful (vs. 39% last year). Many NetSquared groups maintain their own blogs and social media accounts, which they use to meet their event reporting and local community support needs. However, the blog is still getting good use. Over the last year we have averaged six posts per week, most of which are event reports, videos and storifys from NetSquared groups. 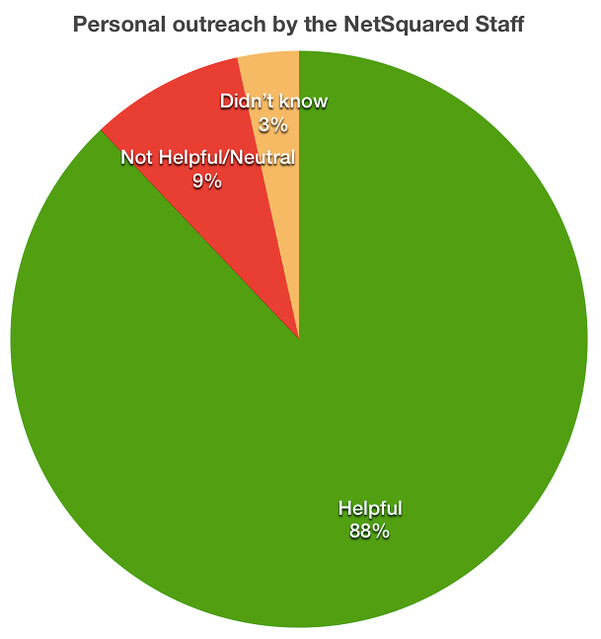 NetSquared’s high-touch approach of one-on-one support is popular with organizers. We expanded that last year with the help of our Regional Ambassadors pilot and hope to add more regions starting in January 2015.

Social Media Promotion of Your Events 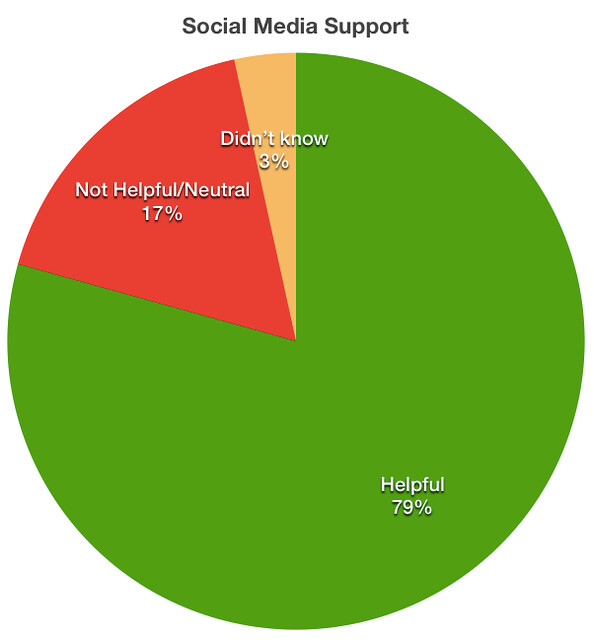 Social media support for events is valued by organizers and this support will continue over the next year. 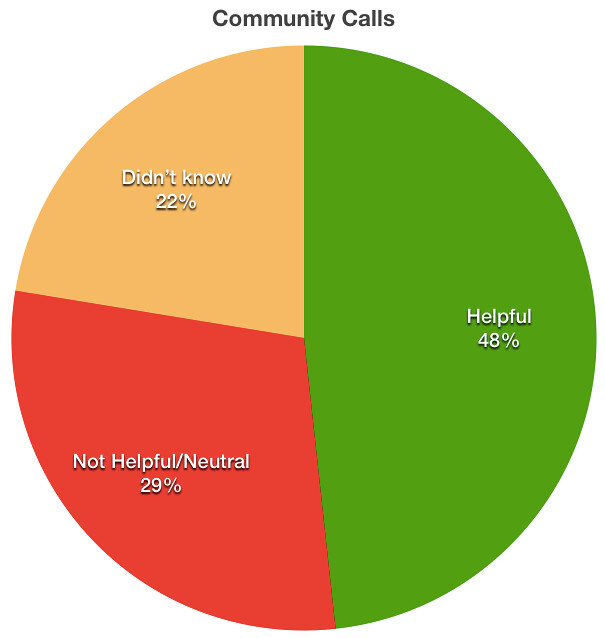 Organizers are split about the office hours and hangouts with an unchanged level of support year-over-year. However, the number reporting that they find it unhelpful has dropped from 44% to 29%. In reaction to the interest of organizers I have reduced the frequency of general community calls to twice-yearly (from quarterly) and will increase the frequency of topic-specific Google+ hangouts to quarterly in support of our theme months and grant launches. 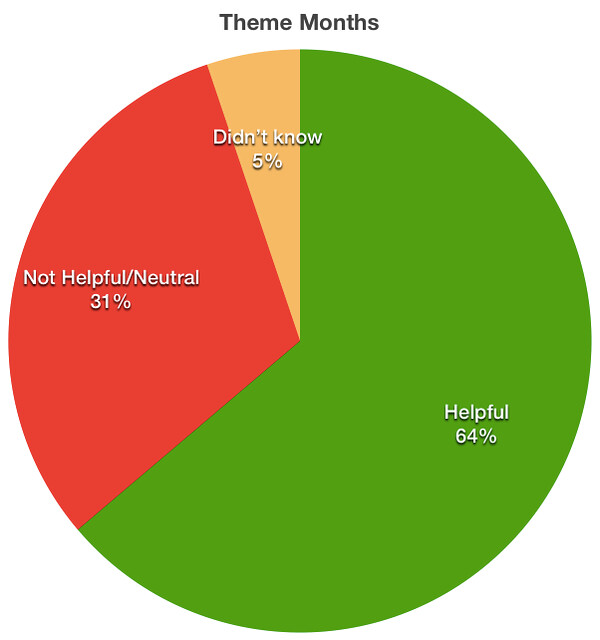 Theme months were not an immediate hit, but support has risen to 64% (from 58% last year). Theme months have been successful at demonstrating the breadth and strength of the NetSquared community. Equally importantly the theme months offer a good way for organizers (especially new organizers) to get involved and hold an event. 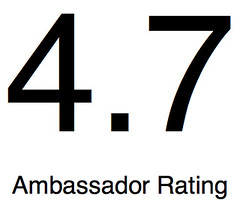 During the last year we piloted a new program called the NetSquared Regional Ambassadors which offered peer support from a veteran organizer to other group leaders in their region. While not all regions had Ambassadors, we asked organizers who worked with an Ambassador to rate their experience on a scale of 1 (not helpful) to 5 (extremely helpful).

We had 30 responses and the average rating was 4.7. 23 of the 30 responses were a perfect “5”. This is a HUGE endorsement of the Ambassador program by organizers who had direct contact with their local leads.

In additional to the NetSquared home-office support organizers highlighted the following additional supports as being key:

What’s Working Well When It Comes to Communications and Support?

Selected and edited responses from the survey:

What Could Be Improved When It Comes to Communications and Support?

Selected and edited responses from the survey:

Notes for Next Year

The survey could be improved by including the question “have you organized an event in the last three months?” to filter responses between active and inactive organizers.The 2014 survey included lots of new or inactive organizers and I suspect their responses and needs differ from veteran members.

The full survey results and respondent comments are published in the organizer’s handbook.